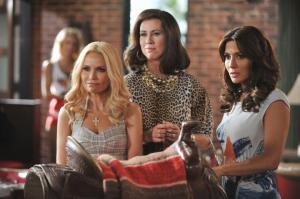 I keep hearing how the new sitcom, GCB bashes Christians. This program is such a parody, that it would be like the airline industry becoming inflamed over the movie Airplane giving them a bad name. If you haven’t watched it, I encourage you do to so before going on a rant to your church group or friends. It’s funny.  And nobody is going to mistake these women for anybody you know at church.

You might, however, see a little glimmer of a few wanna-be’s you know around town. And that might make you giggle. Like when they set up a V.I.P. refreshment tent for the parents inside the gym at the pep rally for one of the daughter’s first cheerleading “basket toss.” Over the top, right? Like I said, not likely to happen in real life.

Robert Harling, of Steel Magnolias fame, from Natchitoches, Louisiana, near my hometown  directs this new ABC series. I’ve gone back and watched every episode. And laughed my butt off. It’s like Desperate Housewives set in Dallas. The main characters are  all atwitter when the queen bee mean girl returns home a humbled and changed woman with two children after the death of her cheating husband. Her former “friends” don’t accept that she’s reformed, while using scripture, tweaking the good book’s intent to justify some pretty unkind behavior.

It’s far less shocking than many shows out there and has us rooting for the good guys the entire time. Good over evil. So while the title might come across as a bit abrasive, I really urge you to lighten up and give it a try. It’s poking fun at cartoon characters, not real people in real life situations. They’re not like us. It’s just another humorous sitcom. You might like it, or you might not. Either way, it’s not worth getting all bent out of shape about.

This is, of course my opinion, and I really do try to stay away from heavy politics and religion in my blog. I know there are a lot of folks who’ve formed a strong opinion about this show, and that’s fine. Everyone is entitled to their own. I’m only asking that you watch the show before you form yours.

Have a wonderful Easter Weekend!